Merciless physics: Drivers and loaders are both responsible for load securing

Over the last few years, the subject of load securing has become very important. However, in spite of all the efforts some basic mistakes are still being made, meaning that many loads are not adequately secured. This results in major accidents with serious injuries and high levels of material damage – especially in domestic goods transport. 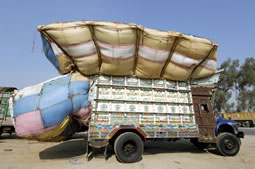 Environmental-economic impact assessment of business models in the Austrian waste economy
© Lehrstuhl für Abfallverwertungstechnik und Abfallwirtschaft der Montanuniversität Leoben (11/2020)
The dynamic macroeconomic one-region and multi-sector model WIFO.DYNK (dynamic new-Keynesian) was adapted to model the employment and value-added impacts of the Austrian waste economy in this respect. It is based on the most recent input-output tables of Statistics Austria.

bifa-Text No. 62: Ecoefficiency analysis of photovoltaic modules / english version
© bifa Umweltinstitut GmbH (2/2014)
The study by the bifa environmental institute describes a future-orientated view of the ecological and economic effects of photovoltaic (PV) systems along their whole life cycle.